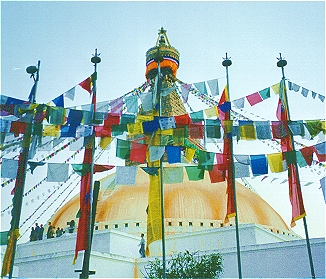 Prayer Flags in Tibet are called Lung Ta (wind horse), which is both literal of the image, and symbolic of the action of the flags. The idea is that by hanging these flags in high places such as from the top of stupas and across mountain paths, the Wind Horse will carry the blessings depicted on the flags to all beings.

The central image of the Wind Horse carries the 'Flaming Jewel' which is the wish fulfilling jewel of enlightenment. The writing printed on the flags include the mantras of Padmasambhava (Guru Rinpoche), Chenrezig and Manjushri. The five colors of the flags represent the five elements: blue for space, white for water, red for fire, green for wind, and yellow for earth.

Prayer flags are not meant to last forever. The fading and eventual disintegration of the flag is considered to be a normal part of the lifecylce of a prayer flag, which is also a metaphor for the greater cycle of life. Prayer flags are replaced annually during Losar, the Tibetan New Year. Because the symbols and mantras on prayer flags are sacred, they should be treated with respect. They should not be placed on the ground or used in clothing. Old prayer flags should be burned.

Tara, known as Dolma or Drolma in Tibet, is said to have been born with Green Tara out of the compassionate tears of Avalokiteshvara to aid him in liberating all living beings from their misery. The transformed Buddha of compassion, Tara represents the entire enlightened activities of all Buddhas.

Padmasambhava, also known as Guru Rinpoche, is credited for bringing Buddhism to Nepal. The Medicine Buddha is, of course, known for health and healing properties. Any and all of these deities may be invoked when hanging Prayer Flags.